This Waiting on Wednesday post is all about October sequels I’m looking forward too. You know, October is another really great month for book releases and my wallet is going to cry. 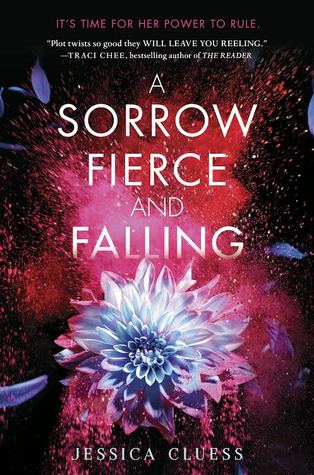 A Sorrow Fierce and Falling by Jessica Cluess

After suffering terrible losses, Henrietta and Lord Blackwood have led their warriors to Sorrow-Fell, a vast estate where only those invited by a Blackwood may enter–and the ideal place to plan a final assault against the Ancients.

It’s time for a wedding.

Henrietta nervously awaits her marriage to Blackwood, but when the ritual to become his bride reveals a dark secret, she realizes that Sorrow-Fell is not a safe haven; it’s a trap. Convincing the sorcerers of this, however, is not easy. So with Maria, the true chosen one, and Magnus, the young man who once stole her heart, at her side, Henrietta plots a dangerous journey straight into the enemy’s lair. Some will live. Some will die. All will be tested.

In this stunning conclusion to the Kingdom on Fire series, Henrietta must choose between the love from her past, the love from her present, and a love that could define her future. While battles rage, the fate of the kingdom rests on her decision: Will she fall or rise up to become the woman who saves the realm?

It’s time for Henrietta to make her stand.

The Devils Thief by Lisa Maxwell

Hunt the Stones.
Beware the Thief.
Avenge the Past.

Esta’s parents were murdered. Her life was stolen. And everything she knew about magic was a lie. She thought the Book of Mysteries held the key to freeing the Mageus from the Order’s grasp, but the danger within its pages was greater than she ever imagined.

Now the Book’s furious power lives inside Harte. If he can’t control it, it will rip apart the world to get its revenge, and it will use Esta to do it.

To bind the power, Esta and Harte must track down four elemental stones scattered across the continent. But the world outside the city is like nothing they expected. There are Mageus beyond the Brink not willing to live in the shadows—and the Order isn’t alone in its mission to crush them.

In St. Louis, the extravagant World’s Fair hides the first stone, but an old enemy is out for revenge and a new enemy is emerging. And back in New York, Viola and Jianyu must defeat a traitor in a city on the verge of chaos.

As past and future collide, time is running out to rewrite history—even for a time-traveling thief.

The Lady’s Guide to Petticoats and Piracy by Mackenzie Lee

Felicity Montague is through with pretending she prefers society parties to books about bone setting—or that she’s not smarter than most people she knows, or that she cares about anything more than her dream of becoming a doctor.

A year after an accidentally whirlwind tour of Europe, which she spent evading highwaymen and pirates with her brother Monty, Felicity has returned to England with two goals in mind—avoid the marriage proposal of Callum Doyle, a lovestruck suitor from Edinburgh; and enroll in medical school. However, her intellect and passion will never be enough in the eyes of the administrators, who see men as the sole guardians of science.

But then a small window of hope opens. Doctor Alexander Platt, an eccentric physician that Felicity idolizes, is looking for research assistants, and Felicity is sure that someone as forward thinking as her hero would be willing to take her on. However, Platt is in Germany, preparing to wed Felicity’s estranged childhood friend Johanna. Not only is Felicity reluctant to opening old wounds, she also has no money to make the trip.

Luckily, a mysterious young woman is willing to pay Felicity’s way, so long as she’s allowed to travel with Felicity disguised as her maid. In spite of her suspicions, Felicity agrees, but once the girl’s true motives are revealed, Felicity becomes part of a perilous quest that will lead her from the German countryside to the promenades of Zurich to secrets lurking beneath the Atlantic.